The Ceramics of Edo Murtić

During his creative career, Edo Murtić tried his hand at various forms of artistic work. While still very young, as well as painting, he did posters and illustrations, and the works in this area done during the war are worthy of any anthology. Later, in parallel with painting in the strict sense of the word, he attempted to employ his characteristic artistic language in ceramics, then in enamels and, of course, in the print. Here too Murtić’s works stood out from everything that was being done in this country. The identifiable sign in all these areas of work was the characteristic hand of the artist: the rapid, forceful and above all extremely confident gesture that confirmed his uncommon individuality. Among the many

genres and techniques he used, Murtić’s works in ceramics and enamel particularly stand out. These works bear all the characteristics that we meet in the paintings, but they also have an unambiguously utilitarian and indeed decorative dimension. What essentially differentiates these works from the classic painting is their character as objects. It is not any longer just a plane surface that is to be subdued with brush strokes and applications of paint; rather, the characteristic stroke has to be inscribed on a hard support, sometimes on circular, cylindrical, or square concave and convex forms. Now the act of painting is not used to master the flat surface placed on an easel or on the floor. Most often these are works of larger dimensions, and the surface is composed of a series of interconnected segments of square or rectangular shape. While he is painting, the artist does not have a good idea of the final effects of the painting, for he has to send the painted parts of the future whole to the next phase of the treatment, the process in which they are fired at high temperatures. It is a fact, however, that Murtić’s works in ceramics, as well as in enamel, give off a familiar intenseness of colour, the same kind of vehemence to be found in the paintings. The brilliance of glaze gives the colour a shine that is impossible to achieve in paintings done in oil, acrylic or tempera on a support of canvas or cardboard, those techniques that this painter most often employed. Ceramic art requires a different technological procedure, the future chromatic register revealing itself only after the firing, that is, when the artist no longer has any control over the work in progress. The works in ceramics chosen for this exhibition, whether actually executed or remaining only in sketches, were made at the end of the seventies and some score of years later. What links them together is that they belong to the same language inventory. These are works in which gesture and colour prevail, and are most often devoid of any reference to the world of objects. Although this is only speciously so, since in the most abstract of signs, in the pure gesture or splash of paint chucked onto the canvas, a substance that links them with the concrete motif is concealed. Speaking of these works of the seventies, from the time of his fiercest Abstract Expressionism and painting of gesture, Edo Murtić insists that he drew those colours right out of the Istrian landscape” and that “here one might speak of some essence of colour”. He really did extract from the landscape the contents he mentions, but in the further process of work they are transformed, they became a world of purely visual sensations. The elements seen in and taken from a concrete landscape run, spread and thicken. Run into broad and forceful strokes that probably have their origins in lines that once described a real scene. They condense into a sign that in its colour or by a characteristic outline has only an association with a given model that the painter remembered in the nearby Istrian space where he lived and worked. Writing about the paintings of Edo Murtić many years back, French critic Jean Cassou observed that “everything is energy in him, whether it is about the content or the movement”. What is most striking in Murtić’s world, in fact, is the vehemence of the movement that he inscribes into the surface of the

painting. These movements in the most precise manner reveal his characteristics and are like graphs that detect the contents of the artist’s personality. When it is his ceramic works that are concerned, we are mostly dealing with large areas, walls put up in some setting, whether in an interior or in a garden or in some public place. Firm and confident gestures in an extremely simple manner

determine the basic structure of the work. However, at the same time, they also give off energy: rapid, forceful movements that unstoppably slip from the field of the painting to fill up the whole space. In later works created from the mid-nineties, until just before the end of the painter’s life, it is possible to find similarities with works from the period of the most powerful gestural painting of the seventies. And those are the periods in which Murtić worked on ceramics intensively, both in small formats (platters and plates, for instance) and also murals, making, indeed, a proposal for a monument to the poet Jure Kaštelan.

Making platters and plates and similar utilitarian and decorative items, Murtić devoted the maximum amount of concentration to them, just as in cases when he made cylindrical forms covered with the same handwriting, the same colour that we have found in the paintings of that time. He imagined these forms as installations of a kind, or rather, sculptures. Edo Murtić however achieved his best in large formats, in murals where he could show all the vigour of his movement, the broad register of his personal style. In works from the end of the seventies, extant mainly in sketches, gestures supplemented with blobs of colour put on by dripping dominate, rhythm being imposed by broad black strokes. But in the mid-nineties and onwards, jerky, short and intermittent strokes of neutral colour came into the expressive inventory of the new works, seeming like fragments left over from the crystallisation of the dominant size. The strident colour, the energy that ripples from the surfaces of the murals must by all means

presuppose some additional contents of the works. Among these contents there is certainly that whichbelongs to the accentuated aesthetic indeed decorative features. These works are endlessly alluring in their beauty and power, which does not at all detract from their artistic value. On the contrary. Aesthetics here take on the characteristic of an aura that expands the field of activity of the concrete work. Probably the most ambitious project that Edo Murtić had the idea of doing in ceramics was the monument to the poet Jure Kaštelan, a very close friend of the painter, whom he had known since his student days, working closely with him up to Kaštelan’s death in 1990. The memorial was imagined as a

gigantic slab placed in a shallow pool of water, the sides being covered with ceramic tiles. Murtić intended to put this in a concrete setting, Ribnjak Park, in the centre of Zagreb, but it was never produced. Actually, in the same park there is a memorial to the poet Ivan Goran Kovačić, done in the sixties by the sculptor Vojin Bakić, one of the most important works of Croatian monumental sculpting. Murtić

imagined the sides of the slab in his monument as murals, and covered them with the characteristics motifs that we found in works that he produced in the late nineties. In some versions of the proposal for the Kaštelan memorial, Murtić covered the area of the glaze with the poet’s verses integrated into the pictorial part of the surface of the ceramic murals. In many works produced in ceramics, or only in the preserved but very precisely articulated sketches, the plates and platters particular deserve attention. Murtić was once again put into a situation in which he had to condense to the ultimate limits his inventory of signs, from gesture and blotches to colour. This was required by the circular formats of the works, almost always of smallish dimensions. His forceful energy that he could wield freely in the great murals was now, speciously at least, reined in. However, in this reining in it would be better to see sublimation, or the skill of condensation. In every one of these works we can find the same linguistic repertory that Murtić used in the paintings and in the large scale murals, but now greatly reduced and brought to the very limits. He was reduced to the core, the power of which spread outside and beyond the edges, confirming in this way that long ago uttered remark of Jean Cassou that everything in Murtić’s works was energy “whether of content or movement”.This exhibition of ceramic works by Edo Murtić reveals to us an important segment present in his work that has never before been shown as a whole, and never even been exhibited as very worthwhile artistic material. And so this extremely useful exhibition whose intention it is to let us get to know more completely, through a little-known part of the rich and versatile creative work, the oeuvre, long ago rounded off and completed, of one of the country’s greatest artists. 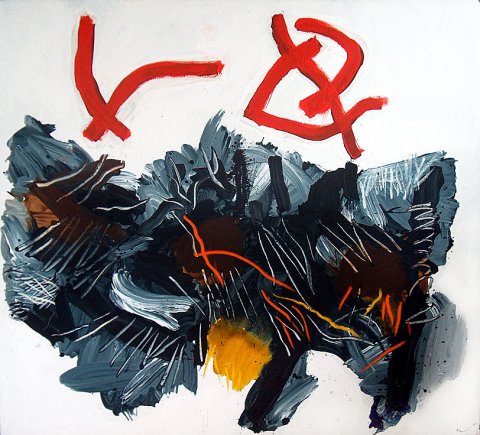